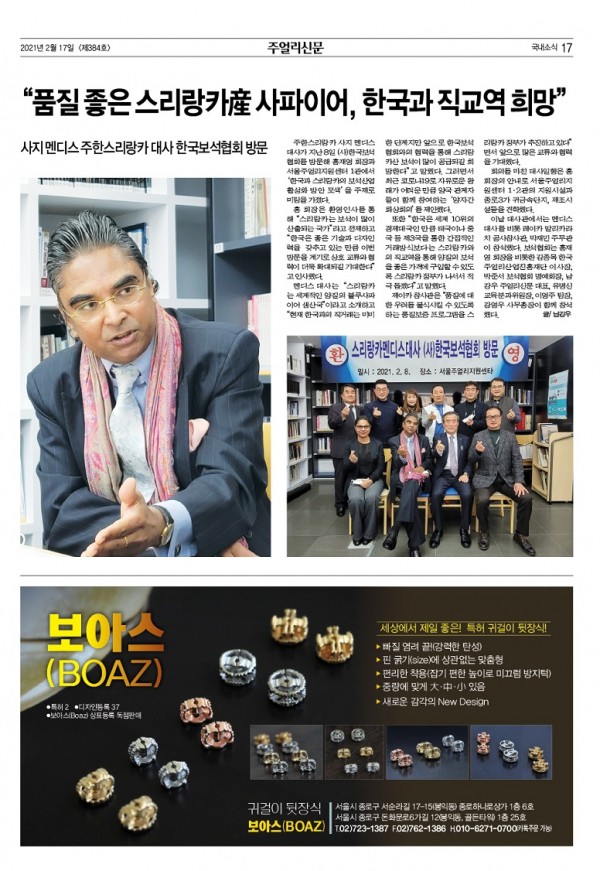 Dr. A. Saj U. Mendis, the Ambassador of Sri Lanka visited KGTA

Dr. A. Saj U. Mendis, the Ambassador of Sri Lanka to South Korea, visited Korean Gem Trade Association on the last 8th and had a conversation with the Chairman, Jaeyoung Hong, at the Seoul Jewelry Industry Support Center to find a possible method of making the gemstone industry prosperous between Korea and Sri Lanka.

Mr. Hong greeted the visitors by saying, “As Sri Lanka produces lots of gemstones and there are numerous skilled designers and technicians in South Korea, I hope bilateral relationship and cooperation will be enhanced from the meeting today.”

Dr. Mendis introduced Sri Lanka as a country producing globally fine quality sapphires and also addressed that His Excellency hopes Sri Lankan gemstones will be supplied with a great volume via cooperation with KGTA despite the fact that the current stage of direct trading volume between the two countries is insignificant. In addition, as COVID-19 thwarts traveling overseas, Mr. Ambassador suggested the meeting online with the authorized people from both nations.

Moreover, Dr. Mendis contended that Sri Lankan Government would support direct trade in order for the fine gemstones to be supplied at a reasonable price and that direct trade would be appropriate rather than indirect via 3rd parties such as Thailand and China, as South Korea is the tenth-largest economy.

The Minister Counsellor, Ms. Rekha Mallikarachchi, said, “To eradicate unnecessary concern against quality of Sri Lankan gemstones, the program issuing certificates has been operating by the government.” Based on this, Ms. Mallikarachchi hoped further exchange and cooperation.

After the meeting, the visitors took a tour the Seoul Jewelry Industry Support Centers and the complex of Jewelry industry guided by the Chairman.