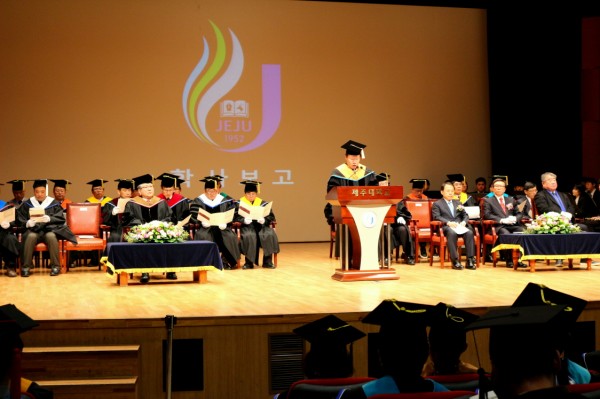 All awards of excellence for Masters and Doctoral Studies at Jeju National University at the Convocation Ceremony for the year 2015 were won by Sri Lankan students studying at the University. This is the first time in the history of Jeju National University that all such awards of excellence at Master and Doctoral levels have been won by Sri Lankan students. This is also the first time that all such awards at a Convocation Ceremony have been won by students from one foreign country.

The Embassy of Sri Lanka in Korea as well as the Sri Lankan Students Association in South Korea have extended their warm congratulations to the students at Jeju National University for their outstanding achievements, as well as for bringing honour to their home country.

Jeju National University, established in 1952, is located in Jeju Island in the Republic of Korea. The University currently enrolls 13,532 undergraduate students including 353 international students and 2,521 graduate students. Among these, 194 international graduate students with 20 Sri Lankan graduates are enrolled in the Master of Science (M.Sc.) as well as Doctor of Philosophy (Ph.D.) Degree programmes. The University offers the Best Researcher Award and the Excellence Researcher Award to Master and Doctoral Graduates for their research findings and publications at the Annual Convocation Ceremony.