The Korea Press Federation and Seoul Press Club, the premier media institution in Seoul, honored the Ambassador of Sri Lanka to the Republic of Korea, Dr. A. Saj U. Mendis, for promoting, aggrandizing and enhancing international friendship and diplomacy and mutual national development between the Republic of Korea and Sri Lanka, including the peoples of the two countries, at this mega event. The aforementioned award was bestowed on Dr. Mendis by Korea Press Federation and was attended by a number of National State Assembly Members (Members of Parliament), Diplomatic Corps, corporate leaders and captains of industry of the RoK, academia and a large contingent of media personnel from both electronic and print, amongst others. 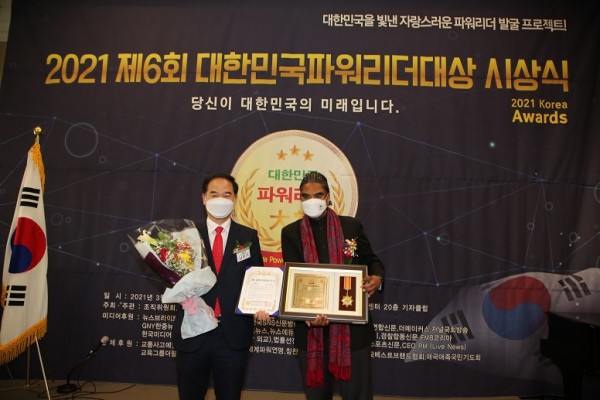 The aforementioned award was bestowed by senior National State Assembly Member of the Parliament of the RoK, Hon. Kim Haejae. After the award ceremony, Ambassador Dr. Mendis addressed the gathering, during which, he expressed deep gratitude to the Government and the peoples of the Republic of Korea for extending assistance, cooperation, facilitation and collaboration for the betterment and advancement of Sri Lanka during the last three decades. He further added that the RoK is home to over 22,000 Sri Lankan expatriates/migrants, who live and work comfortably in the RoK, thus providing much needed foreign exchange to Sri Lanka.

Dr. Mendis, in the presence of a number of National State Assembly Members, enunciated and entreated the relevant authorities of the RoK to receive not only the re-entry workers but also the new-entry workers from Sri Lanka since they have been literally stuck in Sri Lanka after duly passing the Korean language examination and other concomitant necessities to secure employment in the RoK. He also added that out of a total of 22,000 Sri Lankan migrants in the RoK, only about a two dozens of Sri Lankan nationals had ever contracted COVID-19 since the beginning of the pandemic. Dr. Mendis also paralleled and equated, during his address, that Sri Lanka today is what RoK was in mid 1980s and earnestly requested the select audience, including corporate leaders, to partner with Sri Lanka in its economic advancement and augmentation as Sri Lanka is well poised and strategically positioned to rise, similar to the unprecedented rise and advancement of the RoK, thus becoming the 10th largest economy in the world and the fourth largest economy of Asia. Dr. Mendis prognosticated that within the next couple of decades, the advancement and rise of Sri Lanka would be known as “Miracle on Kelani River” similar to “Miracle on Han River” of  the RoK or “Miracle on Rhine River” of the then West Germany.