The Embassy of Sri Lanka to the Republic of Korea and Korea Trade-Investment Promotion Agency (KOTRA), particularly New Southern Policy Team of KOTRA, in close association and coordination with the Board of Investments (BOI) of Sri Lanka and the Embassy of the Republic of Korea in Colombo conducted a 90 minute high-profile webinar to promote and to encourage as well as to educate and to edify potential investors, business houses and corporate leaders with regard to the investment opportunities and vistas in Sri Lanka, with particular focus on Foreign Direct Investments (FDI) and Foreign Institutional Investments (FII) respectively. The webinar was attended and viewed by well over 500 select participants and potential investors, mostly from the Republic of Korea, and was held a couple of days ago. 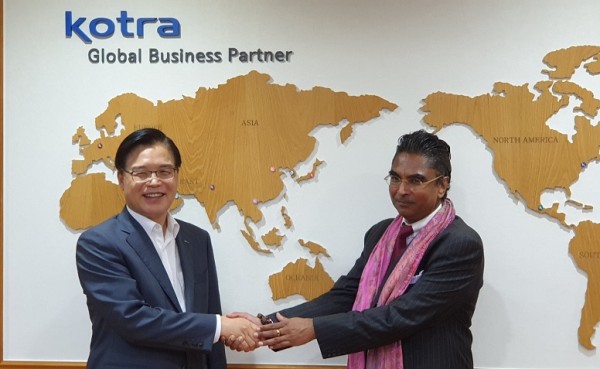 President and CEO of KOTRA, Dr. Pyung Oh Kwon, meeting the Ambassador of Sri Lanka, Dr. A. Saj U. Mendis, at his Corporate Head Office in Seoul

The President and CEO of KOTRA, Dr. Pyung Oh Kwon, made the opening remarks and set the stage for the subsequent speakers and experts to expound and elucidate the opportunities in Sri Lanka for investors of the RoK to commit investments in FDI and FII. The President and CEO of KOTRA, Dr. Oh Kwon, is a highly respected personality specialized on international trade and investments and has been the Deputy Minister for Investment at the Ministry of Trade, Industry and Energy of the RoK. The KOTRA, which is equivalent to the BOI of Sri Lanka, is the principal body which coordinates and facilitates most of the foreign direct investments and institutional investments. The President of KOTRA stated in his address to look at Sri Lanka as the next investment destination for Korean corporates, companies and business houses since the investment milieu is highly conducive in Sri Lanka compared to most of the countries in the region. The Ambassador of the Republic of Korea to Sri Lanka, Jeong Woonjin, stated that the country has a very stable Government and economy, which are two critically seminal factors for any potential investor to consider committing FDI and FII. He further added that he had the opportunity to witness the Parliamentary Elections conducted on 5th of August 2020 and it reflected absolute trust and confidence of the people. Ambassador Woonjin further added that Sri Lanka is very safe and is well poised to receive FDI and FII, particularly, from the Republic of Korea since the two countries have been engaged in economic and commercial activity for well over four decades. Ambassador Woonjin stressed and impressed the fact that the RoK used to be one of the largest Foreign Direct Investors of Sri Lanka in 1990s and urged large corporate houses and investors to seriously re-consider Sri Lanka as the next investment destination. 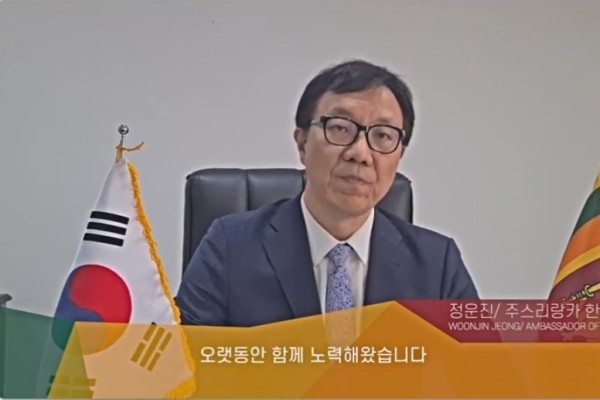 Ambassador of the Republic of Korea to Sri Lanka, Jeong Woonjin, delivering his address at the Webinar on Investment Opportunities and Vistas in Sri Lanka for potential Korean investors

Ambassador of Sri Lanka in the Republic of Korea, Dr. A. Saj U. Mendis, in his remarks stated that the newly elected Government of Sri Lanka under the National Policy Framework known as “Vistas of Prosperity and Splendor” considers FDI as one of the key strategic pivots in elevating and advancing the overall economy of Sri Lanka. Dr. Mendis accentuated the fact that Sri Lanka has all the inherent and intrinsic attributes and characteristics to attract and to woo FDI and FII than most of the other countries and all foreign direct investments are guaranteed by the Constitution of Sri Lanka. He listed out a number of positive attributes that Sri Lanka offers to foreign investors, which very few countries offer not only in the region but in the world. Dr. Mendis stated that the Republic of Korea has committed FDI and FII amounting to approximately USD 60 billion in year 2019 and the primary objective of Sri Lanka would be to attract and woo 0.5% to 1% of the FDI of the RoK. This figure would translate to approximately USD 300 million to 600 million. He also added that the equity and debt market of Sri Lanka are also highly attracted for FII since the Price Earnings Ratio (P/E) is approximately 10.5, which is lesser than in most of the markets around the world. Having delineated the opportunities and vistas of FDI and FII in Sri Lanka for potential investors of the RoK, Dr. Mendis stated that both the BOI and the Embassy would strive tenaciously and resolutely to do the very best to match and to vie with any other nation which offers better incentives or better investment milieu vis-à-vis FDI. In this context, it is imperative that Sri Lanka, with particular focus on BOI and the Embassy, should duly earn the trust and confidence of potential investors of the RoK to commit FDI and FII to Sri Lanka. 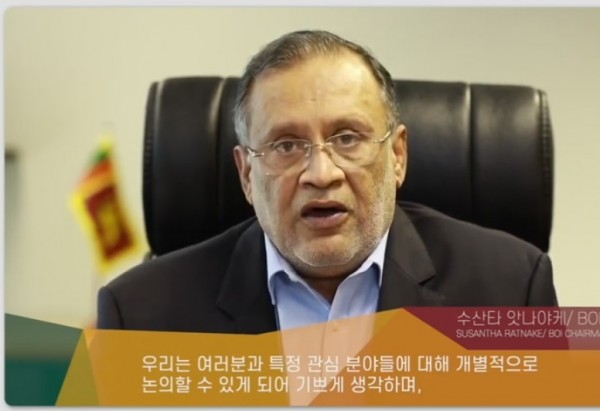 The Chairman of Board of Investment of Sri Lanka, Mr. Susantha Ratnayake, making his remarks on the investment climate and milieu of Sri Lanka and the role of the BOI at the webinar titled “Investment Opportunities in Sri Lanka for Korean Investors”

Mr. Sung Hun Lee, Director General of KOTRA in Colombo and his team made a comprehensive and informative presentation of the entire investment climate and sphere in Sri Lanka. The presentation did encompass almost all sectors and disciplines, where FDI and FII could be committed by large corporate houses and Chaebols in the RoK. The Chairman of the Board of Investments of Sri Lanka and former corporate captain & CEO who led the largest conglomerate i.e. John Keells Holdings in the country, Mr. Susantha Ratnayake, urged and entreated potential investors to consider Sri Lanka very positively and favorably given the innate attributes and features in the realm of FDI and FII. He further added that the BOI and the Office of the Chairman and Director General of BOI would be totally at the disposal of potential investors and corporate houses of the RoK vis-à-vis FDI and FII. The Director General of BOI, Mr. Sanjaya Mohottala, cogently and lucidly expressed his sincere optimism and sanguinity as well as firm conviction of the interest displayed and manifested by both the countries with regard to committing of FDI and FII to Sri Lanka by the RoK. Director General Mohottala added that the BOI would be eager and fervent to welcome any potential investor to Sri Lanka who wishes to commit FDI/FII in Sri Lanka, thus mutually benefitting both the countries. The webinar was concluded with a Q & A Session, which included number of questions and clarifications from the audience.