The Embassy of Sri Lanka in the Republic of Korea in close coordination with the Ceylon Chamber of Commerce (CCC), Korea Importers Association (KOIMA), Korea Business Council and of course Embassy of the Republic of Korea in Colombo conducted a Webinar, this week, with particular focus on business opportunities and vistas, strategies to enhance bilateral trade particularly exports of goods and services of Sri Lanka to South Korea, investment and commercial opportunities and tourism, amongst others. The key speakers were the Ambassador of South Korea in Colombo Amb. Jeong Woonjin, Chairman & CEO of KOIMA Mr. Kwang-hee Hong and Senior International Director of KOIMA Mr. Joong-hyun Jough, Chief Economist of CCC Mr. Shiran Fernando, President of Sri Lanka-Korea Business Council Mr. Priyantha Mendis and Ambassador of Sri Lanka to Seoul Dr. A. Saj U. Mendis respectively. Ms. Lilakshini De Mel, Senior Assistant Secretary General of the CCC, coordinated, orchestrated and publicized all spheres of this high-profile Webinar along with the two Embassies and KOIMA. 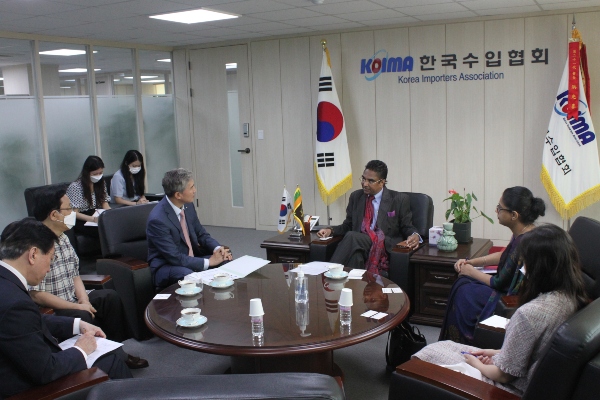 Meeting with Chairman of KOIMA Mr. Kwang Hong and Dr. Mendis at the Corporate Head Office of KOIMA mapping out the issues to be focused on the Webinar as well as to enhance exports and (seated) from left to right are Mr. Joong-hyun Jough, Executive Director International Cooperation; Vice Chairperson, Mr. Simon S. Park; and Ms. Rekha Mallikarachchi, Counsellor of the Embassy respectively

This Webinar focused, primarily, on enhancement and augmentation of exports of goods and services from Sri Lanka to South Korea, amongst others, and was attended and participated by a large number of audience from both the countries. A number of noted corporates, entrepreneurs, business houses, senior bureaucrats and technocrats and academics mostly from Sri Lanka as well as from South Korea participated at this Webinar. The President of Sri Lanka-Korea Business Council made the opening welcome remarks, whilst Mr. Shiran Fernando of CCC, introduced the respective speakers of the Webinar as the moderator. 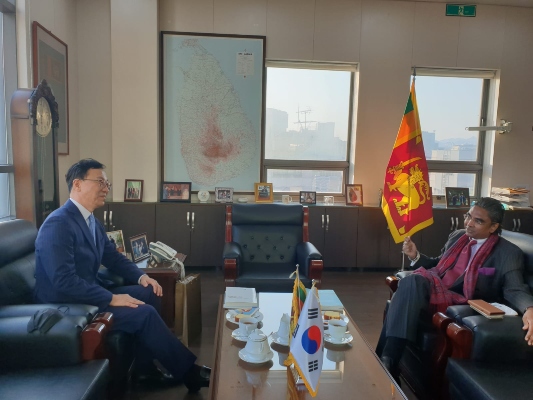 Ambassador of the Republic of Korea to Colombo, Jeong Woonjin, discussing issues of relevance and significance with Dr. Mendis in the Embassy, just before his departure to Colombo

Ambassador Jeong Woonjin stated that being in Sri Lanka for only two months, he could witness on first-hand basis the potential and vistas of the country, particularly in the context of the manner in which the General Elections were conducted on 5th of August 2020 as well as efficacious containment of COVID-19. He accentuated two key factors, which were trust and confidence of the peoples of Sri Lanka and of the international community vis-à-vis Sri Lanka. He further enunciated a very positive and sanguine message of Sri Lanka, particularly to Korean corporate leaders and entrepreneurs to be engaged with Sri Lanka. The Chairman of KOIMA expounded the goods and services imported to the RoK and ways and means to enhance and aggrandize the exports of Sri Lanka to the RoK, in particular. It may further be noted that the KOIMA is the focal Institution in the entire country with regard to imports to the RoK similar to the BOI of Sri Lanka with regard to FDI and FII. The Senior Director of International Affairs of KOIMA made a comprehensive presentation which encompassed opportunities in the import sector of South Korea.

Ambassador Dr. A. Saj U. Mendis stated the courses of action Sri Lankan corporates and entrepreneurs should implement and execute in order to capture and penetrate the highly competitive Korean market, thus enhancing the exports to South Korea. He added that today South Korea is the 9th largest economy in the world and in 1960s was one of the poorest nations in the world. He added that the imports of South Korea in 2018 were in the vicinity of USD 530 billion and if Sri Lanka could capture, only 0.1%, it would amount to USD 530 million. This would be an increase of over 700% compared to the exports from Sri Lanka to the RoK in 2019. Dr. Mendis also added that 50% of Sri Lanka’s exports to the RoK comprised of apparels, coconut and rubber products and tea and accentuated the vitality and seminality to diversify the export basket. He added that a couple of largest corporates/banks in the RoK have expressed keen interest and the largest commercial bank of the RoK had committed an investment of over USD 600 million on an entity owned by Sri Lankan “Blue chip” company, LOLC, in Cambodia. With regard to tourism, Dr. Mendis added that if Sri Lanka could tap only 0.5% of the Korean tourists and travelers travelling abroad, it would be in the vicinity of 140,000. This is given the fact that 28 million Korean nationals travelled abroad in 2019.

Both the Ambassadors and Chairman of KOIMA made parallels to “Miracle on Han River” referring to the unprecedented economic advancement and evolution of the RoK and “Miracle on Rhine River” referring to the rise of the then West Germany after the WWII and added that Sri Lanka too is well poised and positioned to be the next “Miracle on Kelani River”. The Webinar concluded with a Q & A Session, which included a number of questions and clarifications from the audience.

The Republic of Korea