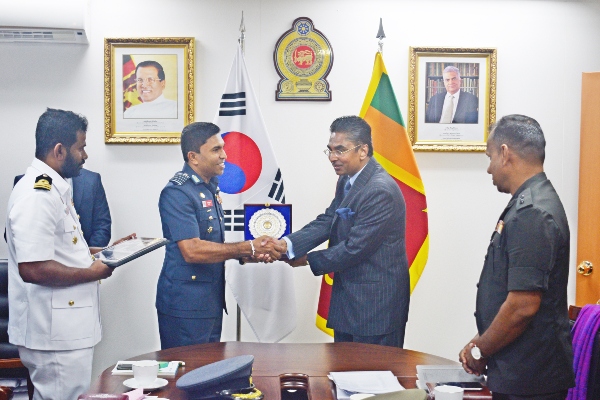 Leader of the Defense delegation from Staff College of Sapugaskanda, Group Captain N.H.N. Dias presenting a memento to Ambassador Dr. Mendis after his presentation to the delegation at the Embassy

A 15-member senior Defense Delegation from Defense Services Command and Staff College of Sapugaskanda visited Republic of Korea for a two-week familiarization and educational program in early September 2019, which was coordinated and organized by the Embassy of Sri Lanka in the Republic of Korea in close association with the Ministry of National Defense of Korea.  The delegation consisted of faculty members of Sapugaskanda Staff College and senior Flag-level officers fro﻿m the three Forces of Sri Lanka. The 15-member delegation was led by Group Captain N.H.N. Dias. This was the second occasion that a Defense delegation from Sri Lanka visited the Republic of Korea on a similar interactive program.

The Defense delegation, consisting of guests, called on the Embassy of Sri Lanka in Seoul to be briefed of the current developments and dynamics in the region as well as in the world, as a segment of their familiarization and educational program. The Ambassador-designate of Sri Lanka, Dr. A. Saj U. Mendis, delivered a comprehensive lecture/briefing encompassing and delineating the current geo-political, geo-strategic and geo-economic developments in the world and the future global order to the Defense delegation. During the two-hour lecture, Ambassador Dr. Mendis enunciated the major and seminal events, which had molded and shaped the geo-political and geo-economic order of the world today. The delegation was also extended over 45-minutes for question and answer session including comments, clarifications and observations. The session was attended by the entire diplomatic staff and other senior officers of the Embassy as well. The Leader of the Delegation, Group Captain Dias, presented mementoes and plaques to Dr. Mendis and to Ms. Sasanga Nikapitiya, Head of Chancery & First Secretary, who primarily orchestrated and arranged the multitude of meetings, appointments and visits of the visiting Defense delegation from Sri Lanka. 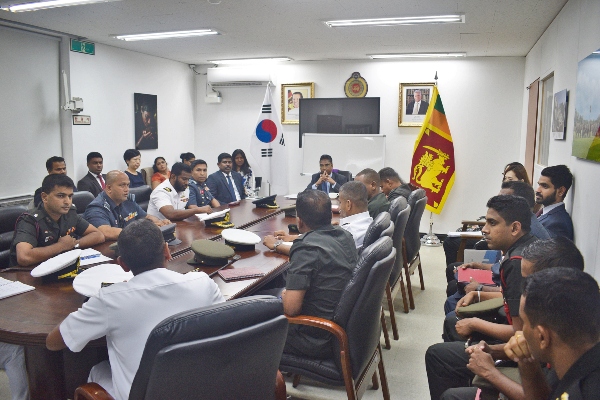 Dr. Mendis delivering a presentation/lecture on current geo-political, geo-strategic and geo-economic developments in the world and the future global order to the Defense delegation at the Embassy

During the two-week program of the Defense delegation, they visited Ministry of National Defense of Korea, Joint Forces Military University, Korea National Defense University, Air Force Base in Suwon, De-Militarized Zone (DMZ) of the Joint Security Area of the Korean Peninsula, War Museum of the Republic of Korea, Samsung Innovation Museum which profiles the much noted Electronic Industrial Museum, Seoul Transport Operations & Information Services known as TOPIS and the second largest city of Busan, where they visited the United Nations Memorial Cemetery and Busan Museum, amongst others. 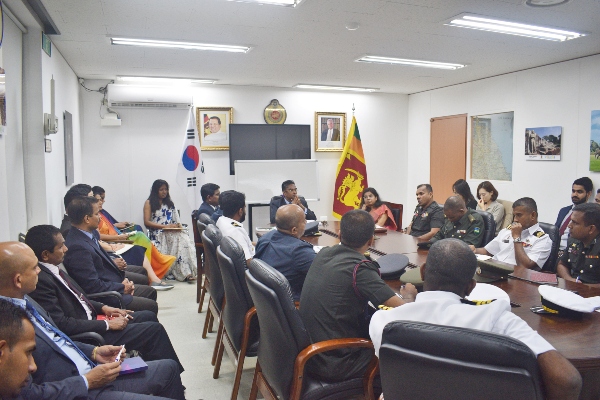 Dr. Mendis delivering a presentation/lecture on current geo-political, geo-strategic and geo-economic developments in the world and the future global order to the Defense delegation at the Embassy

The Defense delegation was briefed by senior Korean Military personnel, analysts and experts on military issues and related subjects on structure of respective institutions, their functionaries and activities as well as their capacities and capabilities, amongst others. The educational tour to Korea extended an abundant opportunity for the officers of Staff College of Sapugaskanda to enrich and to enhance their knowledge, comprehension and perception in the spheres and provinces of military developments and functionaries, political and economic diplomacy, functioning of governmental and non-governmental institutions and apparatuses, economic and technological advancements of the Republic of Korea and of course socio-cultural affinities of the country.