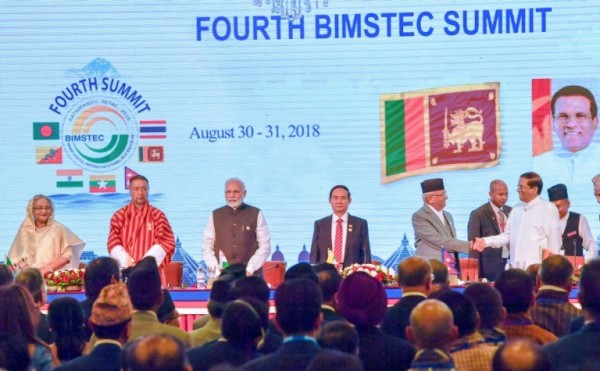 Sri Lanka was handed over the Chairmanship of the Bay of Bengal Initiative for Multisectoral Technical and Economic Cooperation (BIMSTEC), at the conclusion of the 4th BIMSTEC Summit held in Kathmandu, on 31 August 2018.

Accepting the Chairmanship of BIMSTEC from the Prime Minister of Nepal K.P. Sharma Oli, President Maithripala Sirisena, thanked all Member States for the trust and confidence placed in Sri Lanka, and said that Sri Lanka looks forward to implementing the ambitious agenda set forth by the Kathmandu Summit. Congratulating the new Chairman, all BIMSTEC leaders expressed confidence that the Organization will move forward with strength under the leadership of President Sirisena. Accordingly, the 5th BIMSTEC Summit will be held in Sri Lanka.

Earlier on 31 August, adopting the Kathmandu Summit Declaration, ‘Towards a Peaceful, Prosperous and Sustainable Bay of Bengal Region’, the Presidents of Sri Lanka and Myanmar, the Prime Ministers of India, Bangladesh, Nepal and Thailand, and the Chief Advisor of the Government of Bhutan agreed to review, restructure and rationalize the existing areas of cooperation of BIMSTEC and to streamline the operational modalities for activities, programmes and projects to achieve tangible results. The Declaration also welcomed Sri Lanka as the new Chair of BIMSTEC.

The Summit also laid the foundation for institutional mechanisms to accelerate the BIMSTEC process. The leaders agreed to establish a BIMSTEC Permanent Working Committee (BPWC), to draft a Charter for the organization, to develop Rules of Procedures for BIMSTEC Mechanisms and Centres and to explore the possibility of establishing a BIMSTEC Development Fund.

The Memorandum of Understanding on BIMSTEC Grid Interconnection was signed by State Minister of Foreign Affairs Vasantha Senanayake on behalf of Sri Lanka, alongside Foreign Ministers and State Ministers of BIMSTEC countries at a signing ceremony witnessed by the leaders.

The Summit Declaration also expressed appreciation to Ambassador Sumith Nakandala of Sri Lanka, the first Secretary-General of BIMSTEC for his valuable contribution in advancing the work of the organization during his tenure.