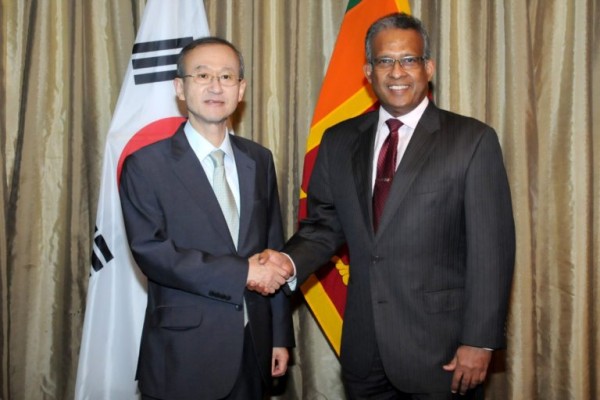 The Second Round of Bilateral Political Consultations at the level of Foreign Affairs Ministries of Sri Lanka and the Republic of Korea took place in Colombo on Thursday 7 June 2018.

The Sri Lanka delegation was led by Secretary to the Ministry of Foreign Affairs Prasad Kariyawasam and the delegation of the Republic of Korea was headed by the First Vice Minister of the Ministry of Foreign Affairs of the Republic of Korea Lim Sung-nam. Senior Officials of both Foreign Ministries participated in the discussions with several line agencies representing Sri Lanka joining as well.

The Political Consultations follow the State Visit of President Maithripala Sirisena to the Republic of Korea during 28-30 November 2017. The primary focus of the discussions therefore, was on making further progress and building on the outcomes of the State Visit, manifesting the close and friendly relations between the two countries. Several ongoing projects and collaborative programmes on trade, investment, agriculture, fisheries, science and technology, culture and tourism were reviewed during the discussions. These included the Tech City Project in Homagama, the establishment of the Gampaha College of Technology, as well as several water supply and other projects under the Korea Economic Development Cooperation Fund.

Reaffirming commitment to further consolidate and advance bilateral political and economic cooperation, the two sides discussed possible new initiatives as well including in the areas of support for e-governance, and assistance to fabric manufacturing with a view to broadening and deepening the multifaceted cooperation that exists between the two countries.

Acknowledging and recognizing the importance of coordinating efforts in multilateral fora to address a range of issues such as health, environment, sustainable development, climate change and human rights, and preserve and advance the rules-based international order, the two sides agreed to work closely together.

Recognising the importance of closer and more frequent interactions, it was decided that the First Session of the Sri Lanka – Republic of Korea Joint Commission within the frame work of the Economic Cooperation Agreement between Sri Lanka and the Republic of Korea signed in November 2017 will be convened in Colombo on 28 June 2018.