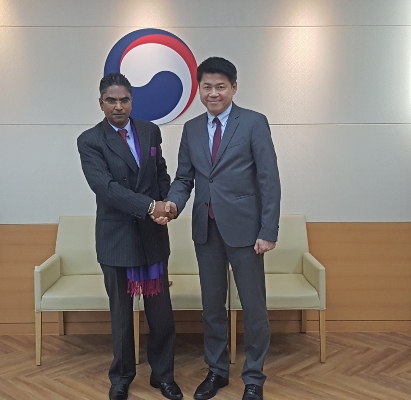 The Korea National Diplomatic Academy, known as KNDA, is the premier and globally renowned Diplomatic Academy under the Ministry of Foreign Affairs of the Republic of Korea, which trains and molds new recruits of the Foreign Service as well as mid to senior level career Foreign Service Officers of the Republic of Korea, Diplomats from other countries and Civil Servants, amongst others. Prof. Joon Hyung Kim, Chancellor of the Academy, was appointed this year and is a senior Professor of International Studies and had served on a number of Governmental bodies, Presidential Commission on Policy Planning, Chair of Advisory Committee of Ministry of Foreign Affairs and Member of the National Security Council, amongst others. Ambassador Dr. Mendis and Chancellor Prof. Kim discussed a myriad of issues in the context of international geo-political and geo-economic sphere. Further, Dr. Mendis suggested that the KNDA can have close affiliation with Diplomatic institutions under the Ministry of Foreign Relations in Colombo, thus enriching both the institutions and the participants of the two countries. Given the academic background of Dr. Mendis, Prof. Kim suggested that Dr. Mendis could deliver guest lectures/speeches, along with other select Ambassadors and senior Diplomats in the Republic of Korea, next year once the new term commences, which would benefit the participants at the KNDA.