The Ambassador of Sri Lanka to the Republic of Korea, Dr. A. Saj U. Mendis, addressed the prestigious and elite Korea Institute for International Economic Policy, popularly known as KIEP, recently. He delivered a Special Lecture/Speech to the Faculty Members, Senior Research Fellows and Fellows and Doctoral candidates of KIEP as well as invited guests on the subject of “The Future potential of South Asia including Sri Lanka and dynamics of socio-economic cooperation between Sri Lanka and the Republic of Korea”.  Over 50 select faculty and research fellows and guests were present at the two-hour Special Lecture at the Head Office of KIEP, mostly from India and South Asia Division. The KIEP is ranked amongst the top 50 of US and non-US Think-Tanks amongst 8,000 research institutes of repute around the world on a survey conducted by the University of Pennsylvania. Further, the KIEP is ranked amongst the five of the top global Think-Tanks focusing on International Economic Policy and is rated as the number one in the entire Asia. 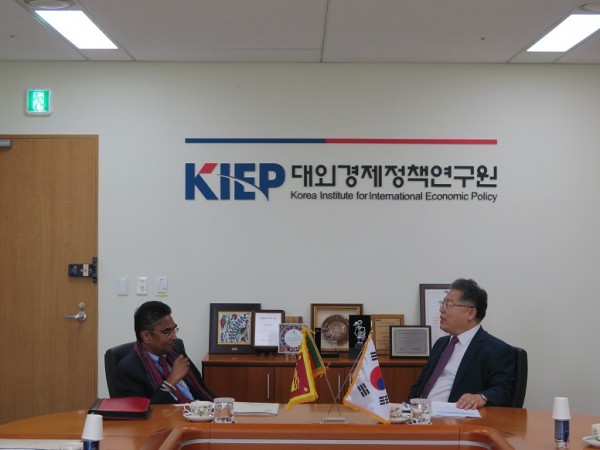 Ambassador Dr. Mendis discussing issues of relevance and economic importance with the President of KIEP, Prof. Jae-Young LEE, at the Head Office of KIEP

Before the Lecture, Dr. Mendis had a courtesy discussion with the President of KIEP, Prof. Jae-Young LEE. President Young LEE of KIEP is a Senior Member of the Advisory Committees to the Foreign Affairs, Presidential Committee on Economic Cooperation, National Security Office and National Unification Council under the President of the Republic of Korea, Senior Advisor of Ministry of Trade, Industry and Energy of Korea and a Visiting Professor at a number of academic institutions including Oxford and Harvard. During the discussion with the President, Dr. Mendis underlined a number of issues and spheres, which the Republic of Korea and Sri Lanka could cooperate, thus mutually benefitting both the countries. Further, Dr. Mendis accentuated the economic, commercial, trade and investment opportunities and vistas of the entire region of South Asia including Sri Lanka. President Prof. Young LEE too agreed to cooperate pro-actively with Sri Lanka given the unprecedented and untapped economic, commercial and trade potential it offers to both the countries. He also stated that KIEP would cooperate and collaborate, particularly in academic economic research, with Think-Tanks, universities and relevant institutions in Sri Lanka, thus enriching the economic research, which could be translated to the vantage of Sri Lanka. 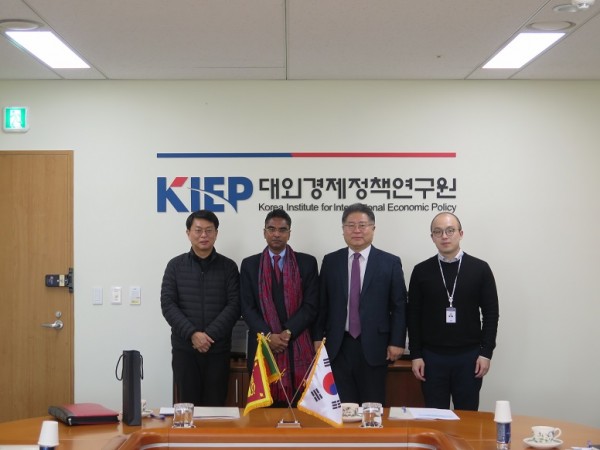 President of KIEP, Prof. Jae-Young LEE, with Ambassador Dr. Mendis and other Senior Faculty of KIEP, before the formal Lecture

During the Lecture, Dr. Mendis accentuated the potential of the South Asia to become a major economic and commercial nerve center in the foreseeable future, particularly, given her immense natural endowments and young and well-educated human resource base, amongst others. Dr. Mendis touched upon the FTAs that Sri Lanka has inked as well as her potential in a number of sectors such as manufacturing, financial services, agriculture, infrastructure development and high-end outsourcing, amongst others. Dr. Mendis made parallels to the economic advancement of the Republic of Korea, often coined, as the “Miracle on Han River” in 1950s and 1960s, thus becoming a major economic nerve center.  He further added that after the WWII, the economic advancement of the then West Germany was also coined as the “Miracle on Rhine River” and added that the Sri Lankan economic advancement, given her unprecedented potential in many realms may be coined as the “Miracle on Kelani River”. After the Lecture, the floor was opened for Q&A and many Fellows made comments and sought clarifications of the subject matter from Dr. Mendis. Dr. Mendis earned his PhD on International Economic Policy from Indian Institute of Technology (IIT) Delhi and MBA from San Francisco State/University of California and is a Senior Fellow at Harvard.