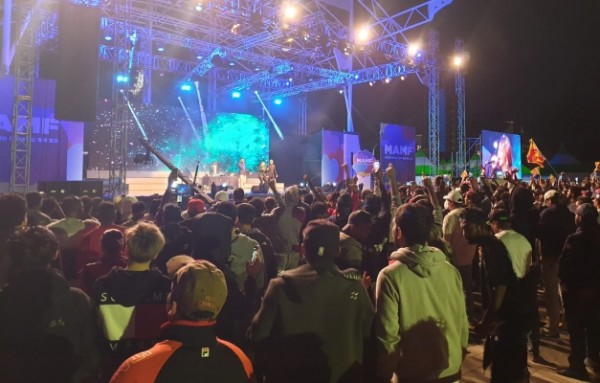 The MAMF is the largest and most diverse multi-cultural festival held in Korea, which represents and profiles Asian culture, cuisine, ethos, entertainment, attractions, attributes and economic and commercial opportunities and vistas, in particular. This event is the 14th MAMF Festival and was attended by well over 200,000 participants, including approximately 3,000 Sri Lankans living and working in different regions of Korea. This was the first ever occasion that Sri Lanka was chosen as the “Featured Country”, thus augmenting and boosting not only future employment opportunities but mostly tourism, economic and commercial activity and enhancement of the image and profile of the country. Sri Lanka’s Ambassador to the Republic of Korea, Dr. A. Saj U. Mendis, warmly and cordially welcomed Mr. Huh Sungmoo, Mayor of Changwon City, as well as the Korean dignitaries, Diplomatic Corps, foreign nationals and Sri Lankans who attended the Opening Ceremony, which was an effervescent and colorful and artistic event with multifarious cultural and musical performances.  The Ambassador extended his deep appreciation and gratitude to the Governor of the Province, His Excellency Kim Kyoung-soo and Mayor Huh Sungmoo as well as the MAMF Executive Committee headed by Mr. Lee Choul-seoung, during his welcome address, for the efficacious, generous and result-oriented support and cooperation extended to Sri Lanka and the Sri Lankan community.

Ambassador Dr. Mendis delivering the welcome address as the representative of the “Featured Country” of Sri Lanka at the Opening Ceremony of the mega MAMF Festival

Sri Lanka as the "Featured Country" and co-host of the Festival, had a highly prominent, patently noticeable and conspicuous presence at the MAMF-2019. The Festival convened all participating nations to one platform and was bustling with people, both young and old, who were representing traditional games, cultural & musical performances and variety of authentic and ethnic cuisine from Sri Lanka and other 15 Asian and East Asian countries. The most amazing and striking factor of the Festival was the diversity and multiplicity of its participants and performers. 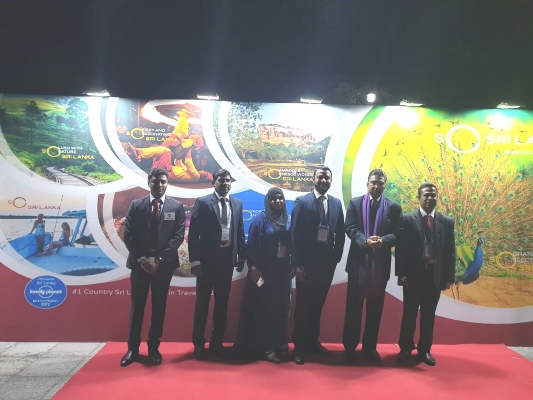 Some of the officials of the Sri Lankan delegation at the Sri Lanka special booth extended to Sri Lanka as the “Featured Country”. (From left to right are Mr. Gayanath Wijekoon, Third Secretary; Mr. P.G.G.S. Yapa, Counsellor of Labor and Welfare, Ms. Hilme; Mr. A.A.M. Hilme, Chairman of SLBFE; Ambassador Dr. Saj Mendis and Mr. K.L.H.K. Wijeratne of SLBFE)

The Embassy of Sri Lanka organized a 16-member cultural performance troupe to perform at the MAMF by National Youth Services Council (NYSC) of Sri Lanka, who were flown all the way from Sri Lanka. Several dance performances by NYSC dance troupe, during the three day festival, which delighted and enthralled the art, dance and culture enthusiasts from Korea and from many other countries, including the dignitaries and diplomatic corps, who participated at the multitude of events in the City of Changwon. The representation from the Province of Gyeongnam was at the highest hierarchy including the Governor, Vice Governor, Mayor of Changwon City and senior most officials as well as the business community, potential employers, banks and travel trade sponsors, Korean celebrities & K-pop group and media participated in the Festival enjoying Ceylon tea, Sri Lankan cuisine and traditional Sri Lankan dance and melodic singing, amongst others. A large number of different products were on display at the Sri Lanka booth as the “Featured Country” such as herbal and Ayurvedic products, cosmetics, multitude of Ceylon Tea, coir products, spices and handicrafts, amongst others, whilst Fadna Tea also profiled their goods and herbal products. A large scale touristic art gallery and other artifacts were also portrayed at the venue for the visitors and guests to witness the touristic attractions and attributes of Sri Lanka.

During the MAMF, the Embassy hosted an official Luncheon Reception on with MAMF Executive Committee, where Korean VIPs including the Mayor, diplomatic corps, potential large scale employers and companies, investors and invited foreign artists and media were present. During the Reception, the Ambassador Dr. A. Saj U. Mendis, and the Chairman of Sri Lanka Bureau of Foreign Employment, Mr. A.A.M. Hilme, presented Special Plaques of Appreciation to a number of Heads/Presidents of Korean companies employing Sri Lankans, in consideration and appreciation of their unstinting support to enhancing and aggrandizing Sri Lanka-Korea employment relations as well as for their contribution to the Sri Lankan economy. 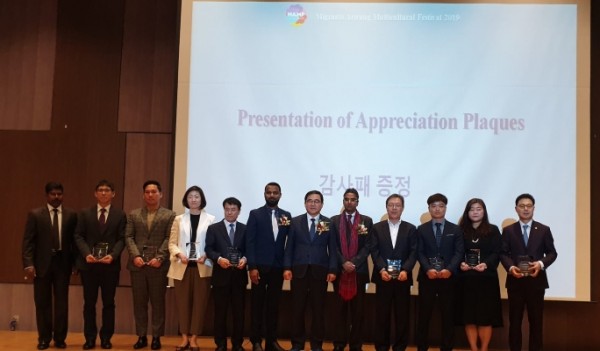 The Mayor of City of Changwon with Chairman of SLBFE and Ambassador of Sri Lanka along with the Heads/Presidents of Korean Companies employing Sri Lankans, along with the special Plaques of Appreciation

The Multicultural Parades from all participating countries were one of the main events profiled at the event, which were full of pride, pageantry and diversity of varying cultures. The MAMF 2019 parade was participated by well over 10,000 performers from over 15 countries. As Sri Lanka contributed a fabulous, inimitable and magnificent characteristics, exclusivity and individuality to the parade with dance performances and showcasing authentic cultural values and creativity, Sri Lankan Parade won the First Prize Award for the Best Performance out of all the countries. The Festival was also colorful with the Asia K-pop music concert, with the participation of popular pop singers from a number of countries including the noted Sri Lankan musical group i.e. Bathiya-Santhush-Umariya, who were also flown to Korea for the event.

The Festival was a significant and momentous opportunity and platform to promote, project and profile Sri Lanka as a premium touristic destination amongst the Korean nationals and non - Sri  Lankan migrant workers in Korea as well as to promote and boost Sri Lankan employment in Korea, economic and trade activity including exports from Sri Lanka to Korea and to profile and project the culture, image and standing of the country, amongst others.