THE REPUBLIC OF KOREA

A number of Ambassadors and Envoys along with a large number of senior most officials of Korea International Cooperation Agency (KOICA), Ministries of Foreign Affairs, Education, Finance and Employment & Labor of the Republic of Korea, amongst others, as well as faculty members and academics attended the high profile Symposium titled “KOICA-CIAT (Capacity Improvement and Advancement for Tomorrow)” at the premier academic institution of Hallym University. The Ambassador of Sri Lanka, Dr. A. Saj U. Mendis, was one of the four panelists at the Symposium. The three-hour Symposium/Seminar was moderated and Chaired by the current President of Hallym University, Prof. Choongsoo Kim, who has held the positions of Governor of Bank of Korea and Adviser for Economic Affairs to the President of the Republic of Korea. The KOICA was represented by the Executive Director of KOICA and other senior officials. 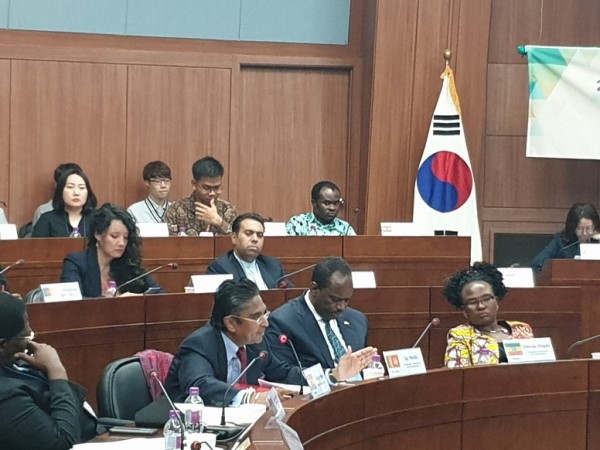 Ambassador Dr. Mendis addressing the KOICA-Hallym University Forum in the presence of other invited Envoys and Ambassadors

The KOICA was established in 1991 by the Ministry of Foreign Affairs of South Korea as a Governmental Organization for Official Development Assistance (ODA) to enhance and boost the efficacy of South Korea’s grant aid programs for developing countries by extending and implementing grant aid and technical cooperation programs. The KOICA is also one of the larger donor agencies in the world similar to USAID of US and JAICA of Japan. The KOICA has extensively assisted Sri Lanka since the early 1990s for her socio-economic advancement and for technical cooperation programs as well as a number of academic scholarships including at Hallym University.

In the welcome address, delivered by the President Prof. Choongsoo Kim of Hallym University, stated that the Republic of Korea was one of the very few countries which has transformed from an “aid-recipient-turned-donor” nation, within a single generation. During the address/speech of Ambassador Dr. Mendis, he stated that Korea after the devastating Korean War in 1950s, was one of the poorest countries in the world with a GDP per capita of only USD 82. During this period, the Republic of Korea solely depended on foreign aid and grants from Western countries for their basic needs and survival since 2/3 of the national production capacity of the country was destroyed and unemployment was soaring rapidly. Dr. Mendis added that fortunately or unfortunately, the donor countries markedly reduced the foreign aid and grants to South Korea, which in turn, compelled the South Koreans to develop and advance their country. He added that this was the seminal transformation and transmogrification of the advancement of South Korea from a least developed nation to an advanced economy. 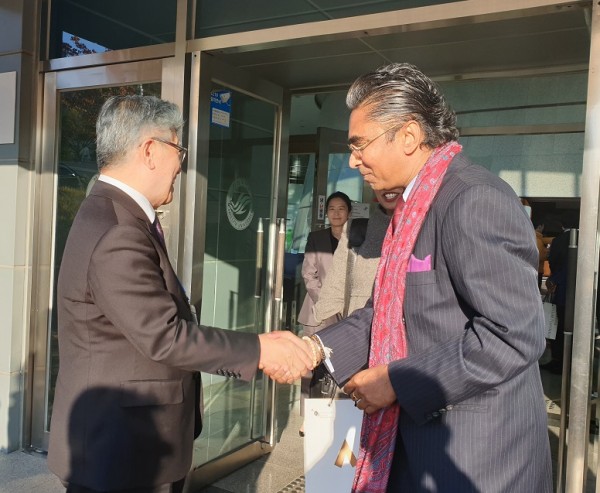 Ambassador Mendis also expounded the so-called “Miracle of Han River” while stating that South Korea focused extensively on export driven economic growth. In other words, the exports of South Korea just five decades ago was USD 833 million and today it has reached USD 635 billion, an increase of 750 times, which was unprecedented in almost in any nation. He further elaborated that the largest ‘Chaebol’ of South Korea is the globally known company, Samsung, which today has a market capitalization of USD 335 billion. This figure is higher than the combined market cap. of three major automakers, GE and IBM of the US. During the address, Dr. Mendis expressed gratitude and appreciativeness to KOICA and to the Government of the Republic of Korea for extending ODA, grant aid and technical cooperation as well as KOICA scholarship programs to Sri Lanka since the early 1990s. Many of the invited speakers including Dr. Mendis attributed the success and advancement of South Korea as a major economic and commercial nerve center for their investment in education and training and fostering and nurturing large global corporates to be evolved from SMEs and mid-size companies. The high profile Symposium concluded with a reception and networking event with the guests, invitees, officials and faculty, most of whom have travelled from Seoul, since Hallym University is over two hours from the capital. 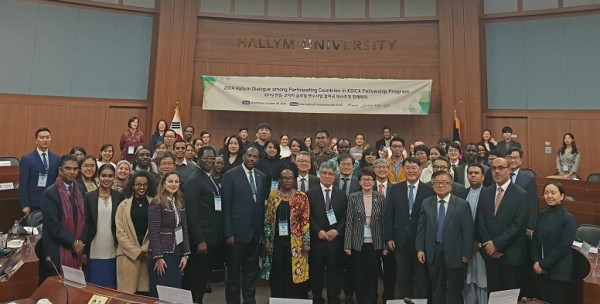 The invited Ambassadors, Envoys, senior officials and guests along with the President and former Governor of Bank of Korea, Prof. Choongsoo Kim, at the conclusion of the formal segment of the Symposium at Hallym University.